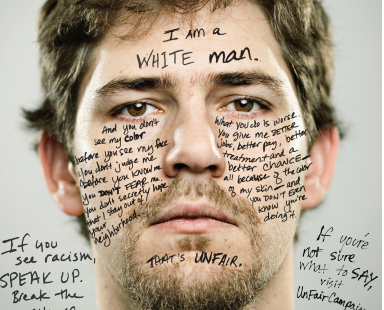 Last night on the Oscars, Chris Rock spoke truth to power. His opening monologue laid it all out for us: We are not living in a colorless society. The Oscars aren’t the only thing that are white. The movies they’re celebrating, the directors who make the casting decisions, the people who choose to see films, they’re all perpetuating a culture that sees clear lines between black and white. Or rather, between white and anything but.

This morning, I read two things that hit me where it counts. First, a friend posted a status that read “Does everyone have to have a platform? Just accept the statue.”

Then, I came across this article about how our entire society is racist and how white people, by default, are racist for participating in it. This line sums it up well:

The result of this is an incessantly repeating argument where a Black person says “Racism still exists. It is real,” and a white person argues “You’re wrong, I’m not racist at all. I don’t even see any racism.” My aunt’s immediate response is not “that is wrong, we should do better.” No, her response is self-protection: “That’s not my fault, I didn’t do anything. You are wrong.”

I’ve been thinking and feeling a lot about this, as a white woman living in the United States in an age of racial unrest. None of us can get away from it, but as a white woman, I don’t have to care about it. My black friends, my Muslim neighbors, my fellow humans of all colors and origins, do. That’s the difference. That’s what we need to know, to realize, and to own. That’s what I’ve grappled with most: How do we, as white people, recognize and work our way out of this inequality without co-opting a discussion that isn’t really ours to have?

To my friend who posted the above status: When we have an opportunity to speak truth to power, especially from a position as privileged as an Oscar presenter or winner, we have a responsibility to do just that. Can we be presented with a microphone and not acknowledge the elephants in the room? Can we sing about anything except sexual abuse on college campuses, when so many students (especially women and LGBT students) are living with the shame of having fallen victim? Can we just go up and accept a gold statue and realize that one reason, one very signifiant reason we’re winning it is because we were lucky enough to be born under the right skin?

When Beyonce came out with her significant new song Formation the day before the Super Bowl, it felt like a sea change. The video lashed out against the establishment that’s killing black people at a rate that should terrify and appall us all, and Queen Bey did so from her very significant position of influence. Her performance at the big game the next day only reaffirmed her message: Shit Has Got To Change.

As expected, the Internet rippled with think pieces about Formation, the Black Panther-esque costumes Bey and her dancers wore, what it means for us.

I didn’t write one because as a white woman, this is not my moment. Formation is a damn good song, and I’ve listened to it over and over. If it doesn’t ring true to you, if it doesn’t feel like a necessary statement, if you’re not compelled to share it with anyone who will listen, you may be reading the wrong blog. But it’s not my place to talk about it publicly. Formation is not talking about me. It’s not talking to me. As a white woman, I need to have the self-awareness to know that not every piece of media needs to include my lily-like face. My voice has no place in that discussion.

Because if we all open our eyes, we’ll see racism every day. I live in a racially diverse neighborhood, and all it takes to realize I’m treated differently as a white female than my black neighbors, than my Muslim neighbors, than my Burmese neighbors, is to look and listen to the world around me. To look and listen to my own heart and what I’ve been taught to think and feel about anyone who doesn’t look or talk like me. Our society is broken, folks. And as a white woman, it’s not not my fault.

As people in that position of power, the position of having the right color skin in the right place at the right time, we need to own that. We need to call each other out on it and accept that we’re the default, then work to change it. That starts at home, with our children and each other. That starts in the streets, and it starts in the boardrooms and audition rooms and courts. It starts with you, wherever you are.

We are the problem. Now let’s work on finding the solution.

This year was really f**king hard in a lot of ways. Started it off with acute COVID, ended it…still with (long) COVID. Learning to live with a new illness science doesn’t yet understand and our country as a whole refuses to acknowledge has been indescribably challenging both mentally and physically, but there were a lot of beautiful moments this year too. @thenickguy traveled to Jamaica and Europe, went camping for the first time as a couple, attended some amazing weddings (shoutout to @mcwm and @kerrymflynn, @sarah.h.arnold and @mykefaba and @katethekid87, did Disney World as a family, and weathered not one but two once-in-a-generation blizzards. We rallied with my @hearstunion family (contract 2023 for the love of all things holy), met some wonderful new people who have become dear friends and had a lot of fun amidst the hardship, but I’m very glad to put 2022 in the rearview. Happy new year, friends. Let’s see what 2023 has for us.
Merry Christmas from our little blizzard celebration. We stayed safe and warm indoors (except for when @thenickguy made me take a blizzard pic). Thankful for power, heat, and safety this holiday when so many are suffering. 🎄