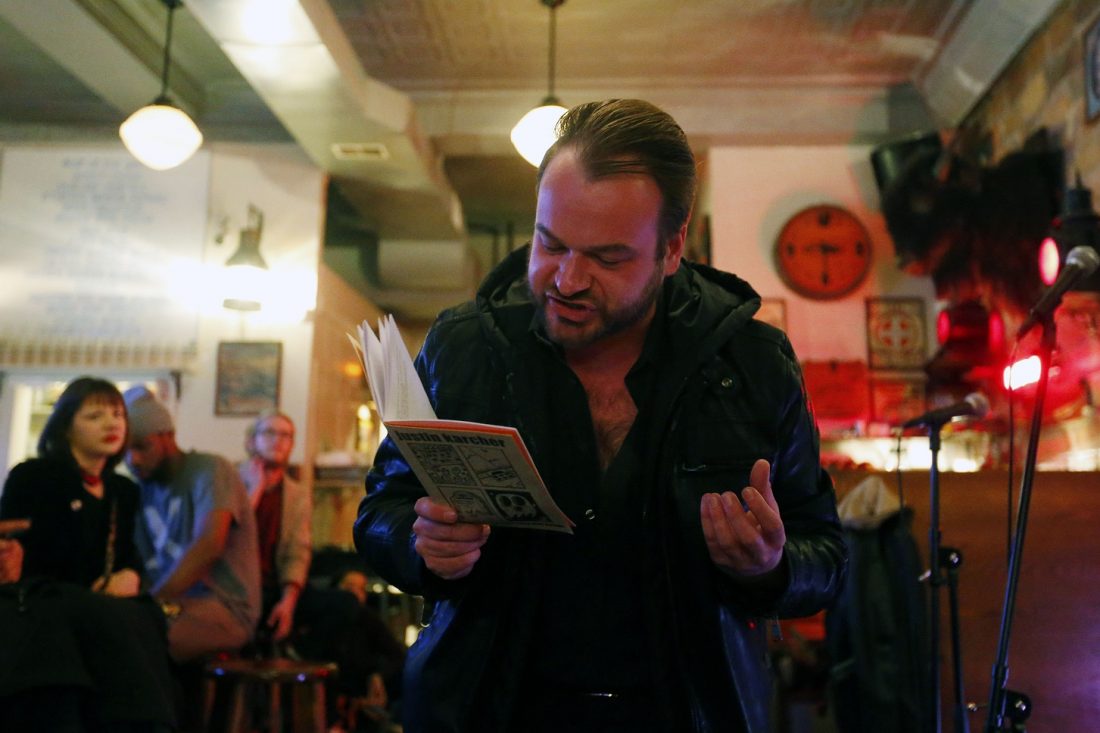 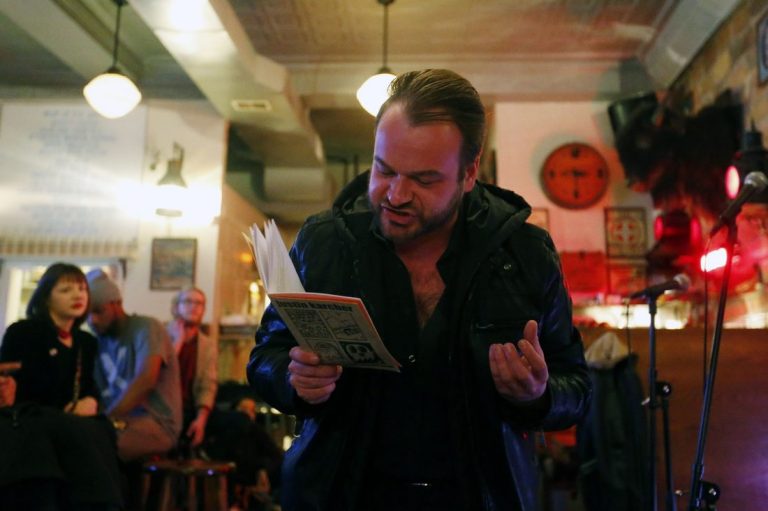 This story originally appeared on The Buffalo News. Read it there to get the full formatting experience.

Buffalo’s poetry culture – like the city itself – is clawing its way from shadowy bars and coffeehouses into the streets, stages and public consciousness. Poetry in Buffalo is not new but a slew of players are keeping it as fresh as the Main Street medical campus, and growing just as fast.

“Whether you write for the page, the stage or for the walls in your bedroom, there is a place for you,” said Just Buffalo Teaching Artist Ben Brindise. Reading series and open mics are long-established traditions in Buffalo, but a host of efforts are revealing a literary culture that’s truly unique – and uniquely Buffalo.

Buffalo poets don’t wait to be noticed. They stand up and proclaim, often to cries of “speak poet” from listeners. Words stream from the Pure Ink monthly poetry slam at Gypsy Parlor on Grant Street and the Ground and Sky Reading Series at Rust Belt Books. They drift out of Cafe 59, where the Allentown Poetry Workshop meets on Mondays.

They echo through concrete shafts in the Just Buffalo Silo City Reading Series, when poetry and live music bring the abandoned silos to life. And they writhe on the pages of Peach Mag, Steel Bellow, Ghost City Review, Foundlings and in publications from Plurality Press and The Cringe Worthy Poets Collective.

Throughout its decades-long history of poetry, Buffalo has claimed an illustrious list of resident artists. Among them are Robert Creely, Charles Olson, Robert Duncan, Irving Feldman, Ishmael Reed and Charles Berstein, who also founded the renowned University at Buffalo School of Poetics.

We’ve been a city of poetry since the 1960s. But much like the Queen City herself, Buffalo poetry is not ivory towers and embossed letterhead. It’s grit and soul that brings people together under the same desperate belief: Buffalo has something to say.

“We acknowledge our writing is an ever-changing product of society, influenced by every interaction we have had, and we, along with our peers, now acknowledge that our voices are important in the world’s ever-going conversation.” – Just Buffalo Writing Center in a speech at the Erie County Legislature cultural funding public hearing

The JBWC reaches out for young poets to nurture and create Buffalo’s next generation of literary voices by providing a free after-school program for writers ages 12 to 18. “While the traditional reading is and will always be prevalent, I’ve been so excited to see more and more events that celebrate and present poetry in innovative ways,” said Robin Jordan of the center.

“It’s really important that young people realize language has tremendous power and it can be used to empower you as well as to enslave you,” added Buffalo News Poetry Editor Bob Pohl. “Drawing young people into poetry is a vital force for this country because all art is transformative.”

Other youth outreach programs include the annual Buffalo Niagara International Youth Poetry Slam which presented a poetry slam and symposium titled “Youth in the Trump Era” on Feb. 11 at the Elmwood Franklin School. That event brought together poets ages 13 to 19 to shout, sing, dance and express themselves. Host Njozi Ensemble also organizes the Buffalo Niagara International Poetry Slam, the region’s largest.

Similarly, the Spotlight on Youth open mic series has collaborated with Gay and Lesbian Youth Services for 13 years, longer than some of its participants have been alive. The 2017 opener at Shea’s Smith Theater featured nearly 100 young poets. The next event is 6 p.m. May 10 at Shea’s Smith (658 Main St.) and welcomes ages 12 to 21 in multiple art forms including spoken word, visual art, poetry and rap; no advance registration is needed.

“Having this kind of spotlight, I hope, will reassure them that they are real writers with real potential to shape the world with their words right now, not one day when they’re older or more ‘established,’ ” Jordan said.

“I find we tend to look at writing in a passive tense, as something that’s happened. Buffalo is happening.” – Ben Brindise, Just Buffalo Literary Center

The strength of the Buffalo poetry scene can be found in its diversity, said Pure Ink Poetry Slam founder Brandon Williamson. Local poets work directly with Buffalo Public Schools, Buffalo Center for Art and Technology and State University of New York campuses. “They know that writing offers you a type of freedom while allowing you to tell your story,” Williamson said.

Pure Ink placed in the Top 15 (out of 72 represented) at the national poetry slam competition in 2016, which was held in Decatur, Ga. The group also bid to host the annual event in Buffalo in 2020.

Pure Ink performance artist Bianca McGraw uses poetry to teach diversity in workshops at the University at Buffalo. “Poetry helps us connect, providing a space for networking,” she said. “We have to learn to support each other without judgment.”

Poetry’s interaction with the community has a storied history and a rich culture of support.

“Poetics is one of Buffalo’s chief cultural exports. It’s hard to compare Buffalo to big cities with large populations, but per capita, the community is as active as any of those,” Pohl said.

“The poetry community itself is young, old, multiethnic, intersectional and inclusive which is why I think it’s grown so much recently. It feels like there is rarely a night that goes by without a poetry event,” Wilson said.

One of the newest events takes its cues from the longstanding Babel reading series. A group of poets recently started the tongue-in-cheek Babble series when they realized they were all releasing books in early 2017. Held at various locations, Babble started in February with Justin Karcher’s “When Severed Ears Sing You Songs,” followed by Brindise’s “Rotten Kid.”

It continues with Aidan Ryan’s “Organizing Isolation: Half-Lives of Love at Long Distance” on April 28 at Mitchell’s Gallery (25. E. Huron St.) and Megan Kemple’s “American Blasphemies” on May 6 at Lakewood Spirits (65 Vandalia St.).

“Maybe that’s the most amazing thing poetry can do – make us evaluate certain things.” – Aidan Ryan on the poetry of Eve Williams Wilson

One of those things local poets have to evaluate is their trajectory.

“There’s a desire deep inside us to not only stay in Buffalo, but to spread her gospel to all corners of the country,” explained poet Karcher of Just Buffalo. “Not only do we want to foster development of talent in the Queen City, we want to provide a map as to where we want to go, but more importantly, who we want to be.”

“The Buffalo poetry scene provided the foundation for identity when Buffalo was struggling with life, when all we’d do was fetishize the past in hopes that we may grab some semblance of identity,” Karcher theorized. “Now that Buffalo has risen from the ashes … there needs to be greater exposure for us poets.”

But to do that, poetry needs awareness.

“What I would love to see is a little more city official involvement in the Buffalo poetry scene,” said Williamson of Pure Ink. “This city is incredible and full of collaborative opportunities. I’m hoping that we can start that journey of becoming one buffalo. One community, thriving in collaborative arts.”

Attend an open mic night or a poetry slam and snap your fingers. Sip a glass of something and revel in the exchange poetry embodies, an encouragement that’s so rare and so unexpectedly subversive in today’s climate. Let it break you open. Embody the experience.

“Speak, poet,” someone will invariably call out. “Tell them.”

This year was really f**king hard in a lot of ways. Started it off with acute COVID, ended it…still with (long) COVID. Learning to live with a new illness science doesn’t yet understand and our country as a whole refuses to acknowledge has been indescribably challenging both mentally and physically, but there were a lot of beautiful moments this year too. @thenickguy traveled to Jamaica and Europe, went camping for the first time as a couple, attended some amazing weddings (shoutout to @mcwm and @kerrymflynn, @sarah.h.arnold and @mykefaba and @katethekid87, did Disney World as a family, and weathered not one but two once-in-a-generation blizzards. We rallied with my @hearstunion family (contract 2023 for the love of all things holy), met some wonderful new people who have become dear friends and had a lot of fun amidst the hardship, but I’m very glad to put 2022 in the rearview. Happy new year, friends. Let’s see what 2023 has for us.
Merry Christmas from our little blizzard celebration. We stayed safe and warm indoors (except for when @thenickguy made me take a blizzard pic). Thankful for power, heat, and safety this holiday when so many are suffering. 🎄